Posted by: hightechreports in Other, TECH NEWS 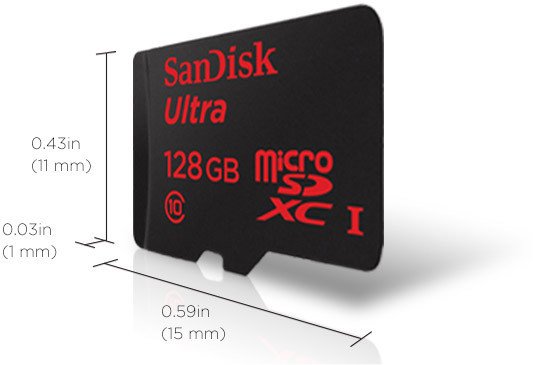 Well-known global manufacturer of memory cards, SanDisk, again is the recorder – they have produced the first microSDXC card in the world with 128 GB.

We do not even need to mention what can be used SanDisk microSDXC 128 MB card for, it is enough to mention that today are still  offered laptops with SSD discs  with “only” 128 GB, and look at the size of these mini-card that is smaller than the average tip of the thumb. Ok, speeds are significantly lower than the SSD, but to have such micro card always at hand it is a great thing, isn’t it?

So, you will SanDisk microSDXC 128 MB memory card use to record movies in high resolution, new video games, great music, plenty of photos and lots more. But why such a small size, you ask? And if you thought about the smartphones, you’re right. The card is primarily intended for smartphones, of course, those who can support 128 GB.

SanDisk microSDXC 128 MB memory card had its premiere at the recently held MWC 2014 show in Barcelona, which is already almost behind us. As far as speed reading, which is about 30 MB/s, and with fact that it is a Class 10 card, it is ideal for video recording at high resolutions.

And that’s not all. MicroSDXC SanDisk 128 MB card is waterproof, do not bother it high temperatures, the sun’s ultraviolet rays, magnets, nor is vulnerable to knocks. With the card you get the “adapter” so that it can be used in several ways.
And in the end, what you are most interested in – price. SanDisk microSDXC 128 GB price will be around $ 200, this price was announced from SanDisk.